December birthstones – what is december’s birthstone ?

The origins of birthstones is a fascinating glimpse into the history of Western culture and its long connection with precious gems. The December birthstones are interesting for their diversity and unique association that makes them the perfect gift for birthdays and the holidays.
You can often see a traditional December birthstone on the necklace, pendant, bracelet, or ring of a person born in that month. What makes such stones so interesting is their unique history and how the meaning of the December gemstone, along with the other months, have changed over the centuries.

The history of birthstones goes back over 2,000 years when Josephus, a Jewish historian in the 1st century AD, noted a connection between the twelve months of the year, the twelve signs of the zodiac, and the twelve stones in the breastplate of Aaron, which signifies the twelve tribes of Israel. Although there is some controversy as to whether Josephus actually saw the original breastplate, his notations were taken seriously by the burgeoning Christian church.
By the 9th century AD, a stronger association between the Foundation stones, which later became birthstones, and the twelve apostles helped to bring together the idea of specific stones being associated with the months of the year. By the turn of the 20th century, the Foundation stones became identified as birthstones associated with the months of the year.

Around the 15th century, birthstones were becoming commonplace in Western cultures. For the month of December, the birthstones at that time were the ruby and bloodstone. This emphasis on red stones for December was commonplace over the next 400 years.

In 1912, birthstones were standardized by the National Association of Jewelers. At that time, the official birthstones for December became lapis and turquoise, a switch from red to blue stones. The list was updated in 1952 which included a switch in the December birthstones from lapis to zircon. By 2002, tanzanite was added to the list for December as well.

Birthstone for the Month of December

There are three main birthstones for the month of December, tanzanite, turquoise, and zircon. All three have the same December birthstone color of blue. The blue reflects this cold, winter month quite well and all of them are quite beautiful to behold. 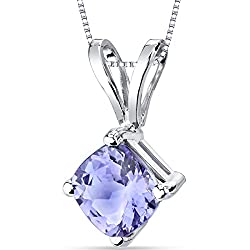 One interesting aspect of these birthstones is that they make for excellent substitutes of more expensive stones. For example, if you choose a colorless zircon, it makes a good replacement for diamonds. However, if you want to keep the color, then you can substitute an expensive sapphire for tanzanite. Plus, the beauty of turquoise is unique, offering a robin’s egg blue color that is unmistakable.
The good news for those on a budget is that you can afford a December birthstone, whether you choose tanzanite, turquoise, or zircon. Each of these stones are beautiful, durable, and inexpensive which makes them the perfect gift. You can compliment your wardrobe by wearing the birthstones on a necklace, bracelet, or ring. For those born in the month of December, the birthstones available are quite fetching and affordable.